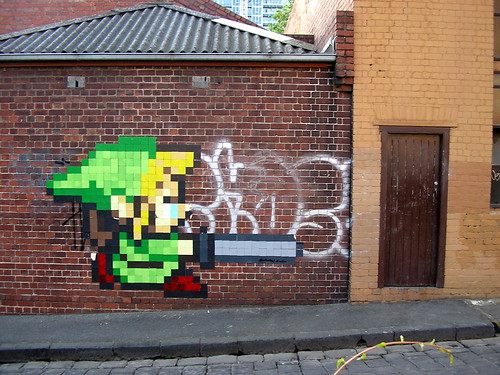 I was recently introduced to some interesting studies, looking at features I’d never noticed in a couple of games that I know very well. These are features that are essential to the feel of these games. Does anyone know of other clever game features that you don’t usually notice?

Wow. It’s a testament to how good this camera system is that I never, ever noticed it before. I especially like the exploit near the end where he bottom-locks the camera then backtracks off the top of the screen.

The bottom-lock and top-lock are an interesting choice, especially considering how easy it would be to only follow the avatar but not allow scrolling below the world. That’s always how I’ve done it. Is this a better method for platformers in general, or is it an artifact of Super Mario Bros (which had no vertical scrolling) to maintain the correct feel? I suspect the former, because keeping the ground in sight is so important for a platformer – and I can think of a few old platformers that broke that rule, and had very frustrating jumping sections as a result.

It’s also very telling, how tightly the camera modes are tied into the different actions the player avatar can take, or states they can be in. It makes sense that climbing and swimming would unlock the camera, but the running bit is kind of a stroke of genius – only slightly less so because of the cape item. I wonder if there’s a reason they didn’t unlock the camera only when running with the cape?

Now I want to go back and look at Sonic 2 and see how their camera works. I always loved how they occasionally let you outrun the camera in that game to create a sense of speed (Chemical Plant Zone, Act 2 comes to mind).

Troy Gilbert: “Movement Mechanics in The Legend of Zelda”

Those dogs! I love this, actually. So clever. A tile-based game with free movement, that subtly corrects you to the grid (though it does feel a bit Orwellian). I remember this peculiarity, but had never put my finger on what was going on.

I’d love to read more about how this works in Link to the Past, where although they have the rounded corner help (most visible in enemies like Moblins, charging toward you) it is still possible to hit a wall and not be deflected in any direction.

Personally, I prefer the elegance of the solution that the Metanet guys used for N: Make the character’s collider a circle instead of a square. This “magically rounds all corners” allowing them to build levels with vector-sharp edges and vector-perfect collision, without all of the sticking or special collision map construction that might be necessary otherwise. In 3D games today, this often means a cylinder or capsule collider for characters (as recommended in Unity).