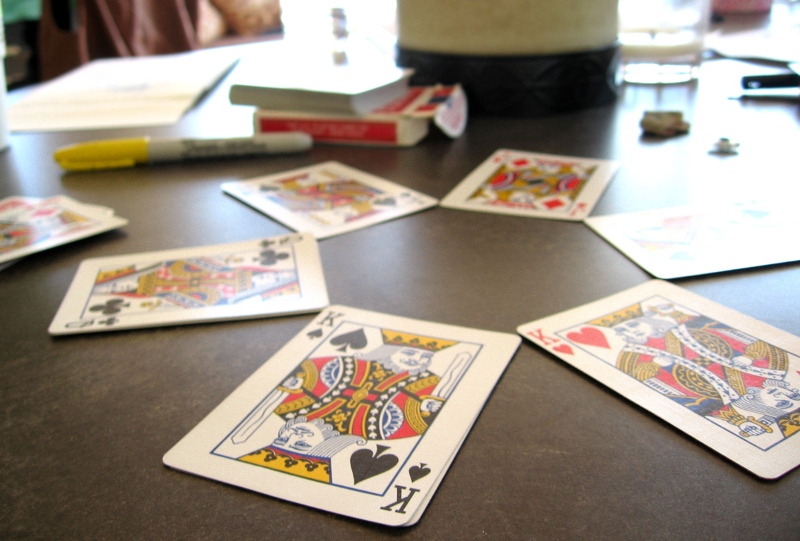 Royal Council is a card game for 2-4 players.

Materials
You need the twelve face cards from a standard deck of cards, and something to keep score (pen and paper or a cribbage board will work).

Set-up
Select a dealer to begin. The dealer shuffles the twelve cards and deals them all out to the players. The player to the dealer’s left begins, and play proceeds clockwise.

Phase One: Appointment
On their turn, a player will play one card faceup on the table, then add up their score (as detailed below). Cards will be played into one of six piles, laid out in a circle. In the appointment phase, cards must be played into an empty space. Appointment ends when all six piles have been started.

Phase Two: Treason
Play continues as in phase one, but players are now free to play on any pile they wish. There is no limit to the height of any pile. Treason ends when all cards have been played. The player to the dealer’s left becomes the new dealer, and another round begins. Play to 121 points.

Scoring
Three sets of cards are scored for each play:

Cards are scored for each combination they are part of. The rule of thumb is that K=3, Q=2, J=1, and a flush combination doubles the value. So the following melds are possible:

If no other points can be scored, a player may score points for the card they played.

If the player has just played the J♥, scoring proceeds as follows:

For a total of 9 points.
If the next player were to play the J♦ over the Q♦, they could score

Discussion
This game has potential, but repeated play will reveal that the Treason phase usually devolves into placing a queen on a queen, a king on a king, etc. Also, the hand you’re dealt basically determines your final score – being dealt all four kings is almost a guaranteed win.

Here’s some variations I’ve thought up: