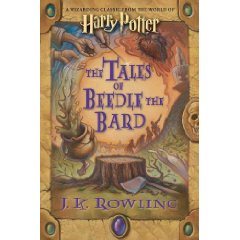 The other book I finished recently is The Tales of Beedle the Bard, by J.K. Rowling (2007). This is a short collection of original fables from the wizarding world of Harry Potter, along with commentary on each story by renowned wizard Albus Dumbledore. Unlike That Hideous Strength, this little book took me all of one morning to read.

I was first drawn to this book after reading “The Tale of the Three Brothers” in the middle of Harry Potter and the Deathly Hallows. In an earlier post I describe how carefully Rowling crafted that book to mirror the fable she wrote at its center. Not only was I amazed at how well the fable was integrated into the book, I loved the simplicity with which Rowling laid down the tale. She drops into a voice that many of us have forgotten, that of Aesop and the Grimm brothers, and the result is a finely-crafted little gem of a story. “Three Brothers” is included verbatim in Beedle, and I was excited to learn what other little stories Rowling had written.

There are five stories here: In order, “The Wizard and the Hopping Pot,” “The Fountain of Fair Fortune,” “The Warlock’s Hairy Heart,” “Babbitty Rabbitty and her Cackling Stump,” and finally “Brothers.” I felt that they improved as the book went on. “The Wizard and the Hopping Pot” felt like fanservice and not much more (not that there’s anything wrong with that), being a silly tale about an annoying enchanted object. It didn’t help that I didn’t understand the main character’s change in personality at the end – I didn’t feel like the events justified the development. “Fountain” was a simple, rather medieval tale of a magical obstacle course that happens to be its own reward, like an abbreviated Wizard of Oz.

The third and fourth tales offered more food for thought, though. “Warlock” was a bizarre tragedy warning against the dangers of proud isolation. In it, the main character reacts so strongly against the idea of love (more correctly, against the idea of vulnerability) that he goes insane. Magic only illustrates in this story – it is hardly present in practice. I can’t say I liked the story, but it certainly gives one something to think about, like “Beauty and the Beast” with the beauty showing up too late.

“Babbitty Rabbitty” ends up being the best of the new stories. A powerful but foolish king who has no magic tries to reserve all magic for himself. A sly advisor attempts to exploit the king’s foolishness, and enlists the help of the eponymous magic washerwoman. But when the advisor’s plan backfires and the washerwoman is threatened with death, she uses her wits and her magic to not only escape death, but to punish the king for his foolishness, to genuinely teach him a lesson in humility, and to save the lives of many of her people. What begins like a play on “The Emperor’s New Clothes” has an ending more akin to the Biblical story of Esther. A person of low rank who knows that they wield more wisdom and power than their superiors uses those traits in an incredibly clever and responsible way, resulting in a good outcome for all. This is a story I will re-read several times, and wouldn’t mind reading to kids, because there’s a lot of good stuff to think about here.

The Dumbledore commentary is amusing and interesting to fans of Potter, but doesn’t reveal anything revolutionary or shed much extra light on the stories. But that’s what I like about them – they stand up well on their own, without additional explanation. This little book is a highly recommended afternoon of reading.