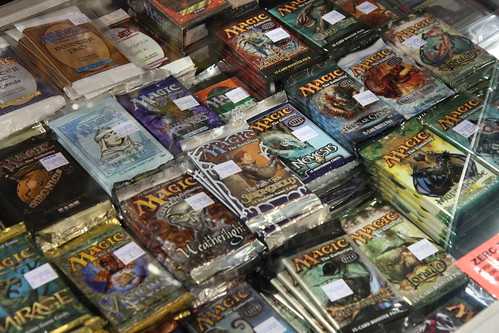 Reflection on an article by Richard Garfield: “The Design Evolution of Magic: The Gathering”

This was a fun article to read, because although I have never played more than one game of Magic I had many friends who were invested in the game in late elementary school. It speaks to the strange and probably unnerving experience of creating a new kind of game: Obviously a huge accomplishment, but also a huge risk. I wonder if Garfield was prepared for the huge maintenance operation he was getting into when the game started to grow?

The most interesting design constraint that came up was this idea that you’d have to make sure there were no bad cards – that, in fact, almost all of the cards were “best” cards, because nobody had any reason to use the poor ones. What a crazy challenge, especially given the sheer quantity of cards present in Magic! I’ve actually come up against the same idea in my dice game, trying to give players as much reason to chase 1s as 6s, but it’s certainly not the same challenge.

Maybe the best insight regarding how a new kind of game was invented, was that Garfield was just trying to distill the experience of a board game into a card format. That sounds like a great strategy – take a game you like, and see if you can implement it in another medium.