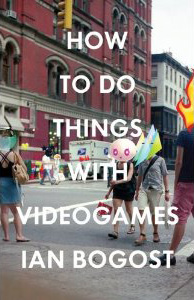 My latest reading: How to Do Things With Videogames by Ian Bogost. I found the book a little disturbing, and estimate that about half my colleagues would be more disturbed than I was. Here’s what I think about it.

At a glance, the title is misleading. This would be more accurately called, “what people are doing with videogames.” Bogost proposes that we can measure the maturity of a medium by the breadth of its uses, and follows with a collection of essays demonstrating the many uses of videogames today. In chapters with titles like “Reverence,” “Pranks,” and “Snapshots” he compares current games to other media, both profound and mundane. Cooking Mama becomes a training simulator. Passage is Dada art. While I think Bogost is stretching a bit to make connections on some topics, he succeeds in offering a different perspective and a glimpse of what form future work in each category might take.

On the other hand, the title drives home the book’s final point like the twist of a knife. “Media,” writes Bogost, “are not democratized; they’re tamed instead.” As videogames mature and are put to broader use, they will cease to be special. They will no longer be under the purview of gamers and game designers – they’ll just be another tool that everyone might use, like photography or radio or television. And when a title like “How to Do Things With Videogames” sounds as textbookish as “How to Do Things With Music” or “How to Do Things With Television,” we will know that videogames have succeeded as a medium. That will be a sad day for gamers who like that their hobby is niche.

It’s interesting that by taking this broad view, the book somewhat justifies many games (often casual games) that have been panned elsewhere. A game can be terrible by mainstream standards but fill an unexpected role very well. An example close to home: My wife has been playing Bubble Blast 2 on her phone lately, and she usually plays a few rounds in bed before falling asleep. For her, this game falls squarely into Bogost’s “Relaxation” chapter – she’s not just having fun or killing time, she’s actually winding down. From a mainstream standpoint it’s simple and repetitive and should get boring by the thousandth level. But as a meditation it succeeds because it’s so simple mechanically and aesthetically.

If I’m taking one thing away from this book, it’s that I’ll stop labeling people as gamers. I don’t think of myself primarily as a televisioner or a moviegoer, so not everybody who plays games needs to be a gamer, either.