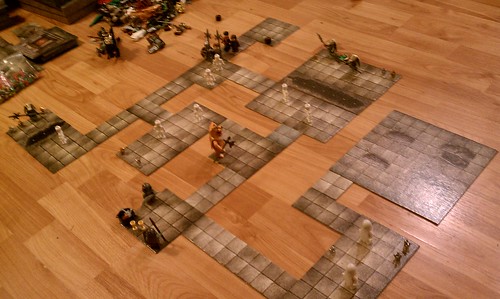 Alexis over at Tao of D&D posted a pretty intense vision for a digital D&D engine that would be infinitely tweakable, moddable, and mouldable to the DM’s wishes. I think it sounds like a super-fancy version of Rohrer’s Sleep Is Death. I would add that it needs a strong community content library, like Spore or LittleBigPlanet, because no single studio in the world could produce enough assets to uphold Alexis’ vision. I do very much like his image of zooming from world level all the way down to view the players, running around town.

Maybe there’s a better setting for this kind of tool than D&D, though… It would certainly be easier to do if you could limit it to a certain established setting and set of rules, at least to begin with. (Alexis, I’m not trying to tell you what you want – just speculating on a related vision, is all.) Is there a place for live GM-ing in digital games elsewhere? Could you publish a co-op action adventure title, and provide the tools for a GM-and-players setup to extend the play experience beyond the main content? It would take a strong community, and a company would certainly want to plant some “pro” GMs in their online service for the first year or so. What genres could you apply this to?

It seems like there might – might – be an audience for this. Player-created content games have nearly become their own genre now. What if you built an MMO where the endgame was that now you get to create a dungeon for other players to explore and/or GM dungeons live for other groups of players? Content and GMs would get ranked. You would actually develop GM celebrities within the community. More people would probably try GMing at least once, since it’s a reward for hitting the level cap. Ooh, let’s make it a space MMO, and instead of a dungeon you get a PLANET to house your dungeons. Everybody wants a planet.

Or what if, as you GMd your dungeon live, the computer learned how you GM and could automatically run like you for future players, filling in the gaps with its own game AI. Each time you GMd live, the AI would learn more from you. Programming by example… it’s the future.