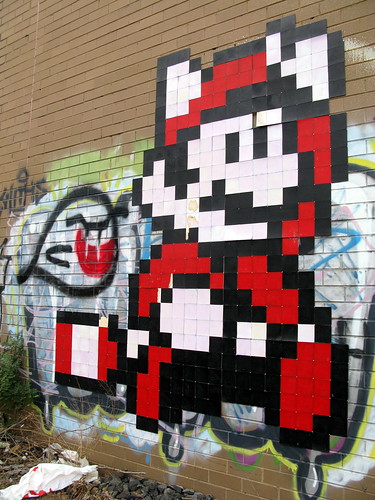 Michael Abbott over at The Brainy Gamer recently asked us, Why does 2D Mario continues to outsell the fantastic Galaxy games? And it’s a great question. I personally think it’s because 2D Mario hits a larger demographic, but it got me thinking about why I like Mario games. Abbott to the rescue again: his Fun Factor Catalog is a convenient tool examining the franchise. Let’s take a look:

Series-Defining FactorsThese “fun factors” are likely to appear in every Mario game:

Super Mario Bros.Has all of the defining factors, except for Following a Franchise and Collecting and Unlocking (though the latter was retroactively added in later versions, such as the re-release for GameBoy Color). Strongest defining factor is probably Tactile Control of Avatar. The Physics Toy is mostly limited to Koopa shells, but they were pretty fun.

Super Mario Bros 2 (Doki Doki Panic)Though not originally a Mario game, this holds on to most of the key factors. I think the one I miss most when playing this game is Physics Toy. I would say its strongest factor is The Hard Teacher.

Super Mario Bros. 3This one follows the series in a pretty stock way. I would say it adds an element of Cooperative/Competitive Play with its strong two-player mode, and also one I didn’t find of Abbott’s list, Page Turner where the player’s progress is constantly rewarded by introducing a new environment, play style, power-up or mechanic.

Super Mario WorldAnother game that capitalizes on being a Page Turner, with the ghost houses and secret exits adding a touch of Making the Player Feel Clever. This game also has what I call Dare to be Different. It undermines player expectations of the series by introducing a whole suite of new characters and images to the Mario canon. (A parallel would be Link’s Awakening to Zelda)

Super Mario 64A landmark for the series, and best-known for Shiny New Tech, but also innovative in adding some Joy of Exploration and lots of Heroic Navigation. Also, the first appearance of Collecting and Unlocking, which goes hand-in-hand with Page Turner.

Super Mario SunshineI think this is the most underrated Mario game. It falls short in the Simple Mechanics/Complete Mastery factor with the complex FLUDD device, and the Tactile Control of Avatar didn’t carry over to Yoshi. It also pulled back a bit on Page Turner by having fewer distinct areas. However, this game took some cues from Zelda and really shines in The Joy of Exploration and in Drinking In the Atmosphere and Dare to be Different. It also takes Heroic Navigation to new levels by providing more walls, ropes, and precarious positions than any past game. Finally, its Shiny New Tech went largely unnoticed: the incredible fluid dynamics present throughout. Those same fluid dynamics made the game beautiful to look at and added another layer to its Physics Toy-ness. All told, this isn’t a bad game, it just emphasized a different kind of fun than a typical Mario adventure.

Super Mario Galaxy / 2 SMG hearkens back to Mario 64 with an emphasis on Shiny New Tech and Simple Mechanics/Complete Mastery. It also has a unique kind of Physics Toy. Galaxy 2 is more of the same but it refines Page Turner to a science, and notably takes some cues from Sunshine for a hint of Dare to be Different.

New Super Mario Bros. / WiiObviously there’s a good dose of Following the Franchise here, but in my experience with NSMBW I would say that its focus lies in Physics Toy and The Hard Teacher.