Writing about Yu-Gi-Oh got me thinking about Dominion, and how it’s about the only board game that my wife actually enjoys.

As a thought experiment, I considered how Dominion would change if you took all the randomness out of the game. It wouldn’t be hard to do. Here are my rule changes:

There you go, deterministic Dominion. I haven’t tried this yet. I’m going to, but I wanted to write down my hypothesis first. I predict that making Dominion deterministic will significantly increase the intensity of the game, which in turn will make it more fun for a few of my competitive gamer friends, but at the cost of alienating more casual players (e.g. my wife).

At GDC I attended a great talk by Luke Muscat from Halfbrick, where he discussed a prototype he created that made people at the office into mean backstabbing jerks. His hypothesis was that three mechanical characteristics of his prototype led to this behavior, together creating a game with an extremely high level of “intensity.”

This Dominion variant is based on the first of his points, and on some of Greg Costikyan’s work on the role of randomness in games. Taking randomness out of a game places the blame for failure squarely on the player. If the ideal family game gives you that “win because of skill, lose because of luck” feeling, deterministic games are missing the second half of that equation.

It’s possible that Muscat’s second point will come into play as well, but I’m not sure yet. I think for less skilled players, the game may go longer as they struggle to stack up the right cards and create winning combinations, and it’s hard to be saved by a lucky shuffle. On the other hand, very skilled players may be able to close the game faster, reducing the stakes of a given game and therefore its overall intensity.

This all reminds me of playing Egyptian Rat (also known as…) in high school, with friends who were trying to count not only the cards in their own deck, but in their opponent’s deck as well. Our version of that game evolved a series of rules designed to preserve its deterministic nature because the high intensity was a major feature – the “slap” mechanic being the primary point of intensity, suggesting that games requiring constant attention or concentration also have a high level of intensity. We were able to pull casual players into Rat though because games were often short, again lowering the stakes.

I’m sure the designer considered a non-deterministic game when creating Dominion – I wonder how quickly it was thrown out. I’ll give this a shot, and if anyone else tries it I’d love to hear about your experience. 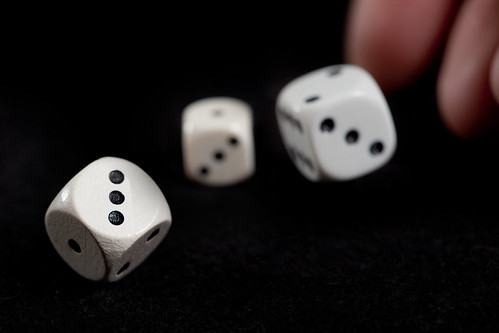 Reflection on an article by Greg Costikyan: “Randomness: Blight or Bane?”